Recently, the FCC released most of the comments it has received so far — commenting is still open for a few more weeks — concerning its (pretty bad) net neutrality proposal as XML files for people to analyze. There have been a few attempts, but the most interesting so far has to come from data analytics firm Quid on behalf of the Knight Foundation and revealed in an NPR article. 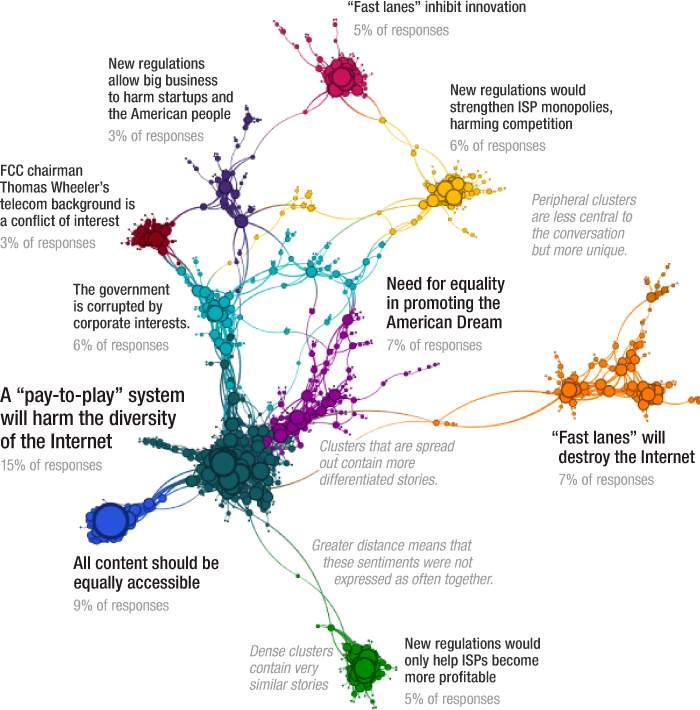 The key reasons pulled from the comments that standout and cluster are definitely interesting and worth noting, but what’s much more noticeable is what’s missing from the map: any significant argument against having the FCC step in and stop the broadband companies from screwing up the internet. The folks who put this together note that there were certainly some such comments, but just not enough to matter:

The comments did include “anti” net neutrality positions. They included statements opposing the “FCC’s crippling new regulations,” as commenters wrote. But they came from a form letter, or template, and all comment clusters that came from templates (five separate ones in all, four of five supporting net neutrality) were collapsed into a single node.

Taken with the entire body of comments sampled, there weren’t enough unique or organic anti-net-neutrality comments to register on the map.

The analysis shows that about 50% of the comments came from templates (again, many of them coming from “pro net neutrality”) folks, but it’s fascinating to see that once you get outside of the form letters, the number of anti-net neutrality letters basically doesn’t register. That’s kind of interesting to me, because I’ve actually been building a list of just those letters (I’ve found a few) and trying to reach out to the folks who wrote them to find out what made them write those letters. I’ve made contact with a few, but as soon as I explain what I’m doing… they all stop responding. I hope to have more on this soon.

Either way, it seems fairly clear that, of the people who actually took the time to express their full opinions about net neutrality, almost all of them are in favor of having the FCC actually do something real. The only question is if the FCC will ever actually listen.