There Is No 'Going Dark' Problem

from the to make investigative omelets, you've got to crack a few phones dept

Former FBI Director James Comey made plenty of headlines with his insistence cellphone encryption would be the end of law enforcement as we know it. Comey’s assertions made it seem as though regular police investigative work was no longer of any use and that any and all evidence pertinent to cases resided behind cellphone passcodes.

He insisted the problem would only get worse in the future. If not put to an end by legislated backdoors or smart tech guys coding up “safe” holes in device encryption, we may as well accept the fact that no criminal committing more than a moving violation would ever be brought to justice.

Default encryption does pose a problem for law enforcement, but it’s nowhere near as insurmountable as Comey has portrayed it. Multiple FOIA requests handled through MuckRock have shown law enforcement still has several phone-cracking options at its disposal and doesn’t seem to be having many problems recovering evidence.

This is superbly illustrated in documents obtained from the Tulsa and Tuscon (AZ) Police Departments by Curtis Waltman. Tuscon PD documents [PDF] show law enforcement officers are using tools crafted by the same company that provided the hack to the FBI in the San Bernardino case, among several other options. But the real motherlode is the Tulsa PD’s log of cracked phones.

The kicker really is how often these are being used – it is simply really hard to believe that out of the 783 times Tulsa Police used their extraction devices, all were for crimes in which it was necessary to look at all of the phone’s data… There are some days where the devices were used multiple times – Tulsa used theirs eight times on February 28th of this year, eight again on April 3rd, and a whopping 14 times on May 10th 2016. That is a whole lot of data that Tulsa was able to tap into, and we aren’t even able to understand the why.

The document contains page after page of cracked phones, ranging from Samsungs to HTCs to LGs… even iPhones (5 and 6). “Going dark” remains a Comey fairy tale, for the most part, if these documents are anything to go by. 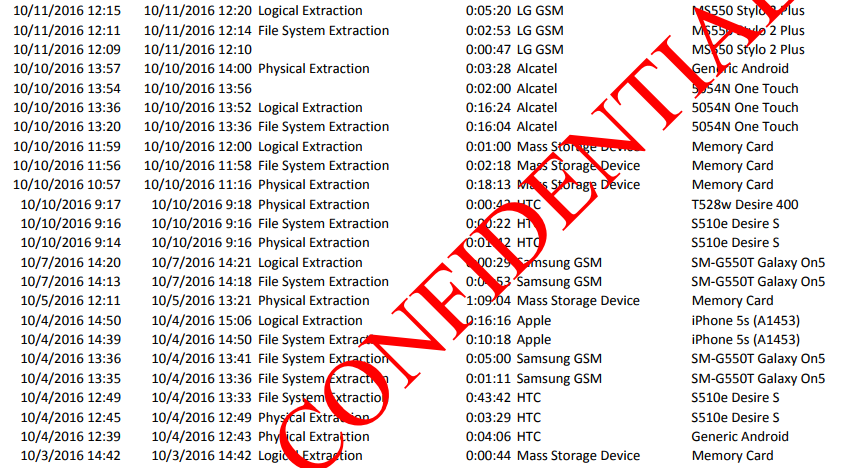 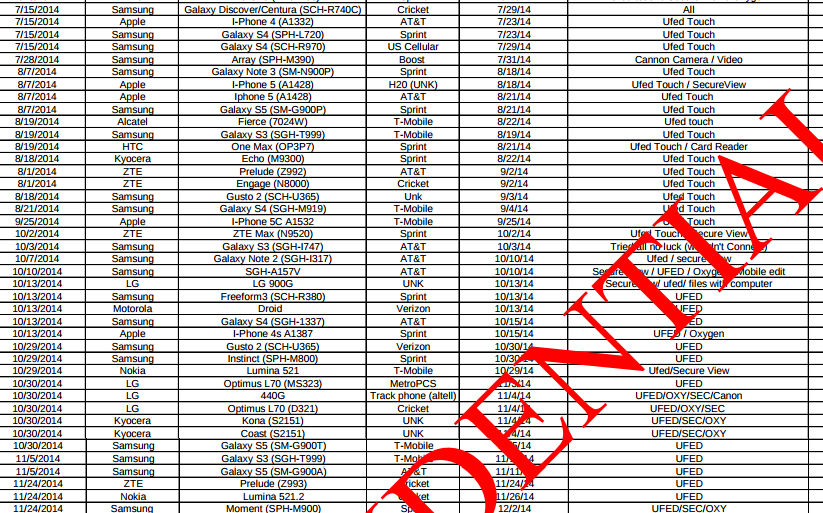 And there’s apparently very few rules for deployment of cellphone-cracking devices. Only one PD in Arizona returned any guidelines in response to requests and those rules basically state there are no rules. The Mesa PD’s Computer Forensic Unit makes the most of its limited resources by limiting its work to… any crime at all.

This is the list of criminal activity the unit provides forensic work for, listed in order of priority.

Homicide
Sexual Assault
Child Crimes (which I assume means “crimes against children,” rather than crimes committed BY children)
Aggravated Assault/Robbery
Property Crimes
All other felonies
All misdemeanors

Everything. That would explain the number of cellphones accessed by these PDs. Presumably other PDs are also operating under very loose guidance or none at all.

This sort of intrusiveness should be limited to serious felonies and investigations where it’s plainly apparent the best route to evidence runs through the suspect’s cellphone. Otherwise, law enforcement agencies are just using these tools because they have them, not because they necessarily need them.