Stories filed under: "graphics"
Expand All Posts Collapse All Posts

My mind has been taken up by a lot of design projects lately, so for this week’s awesome stuff we’re looking at some excellent graphic design from the world of crowdfunding.

Though the majority of what we write about here at Techdirt is earthbound technology, I know there are plenty of space enthusiasts in our audience. If you’re among them, you might like the idea of decorating your walls with elegantly designed posters of famous robotic spacecraft. The ultimate plan for this project is a series of three, but so far just one has been unveiled depicting the Voyager probe. If the others are as visually well-conceived and composed, it will be a very attractive set.

New York City’s subway signage is some of the most identifiable graphic design work out there. Like all good functional design, the vast majority of people who see it make no conscious notice of it, but they would also instantly recognize it anywhere in the world and immediately notice it if it changed. These handmade wooden replica NYC transit signs let you bring some of New York’s iconic visual language into your home. And for those who want to dig deep into the design philosophy of the world’s most famous signs, there’s another Kickstarter project selling a reissue of the 1970 NYCTA Graphics Standards Manual.

The Art Of Sandwiches 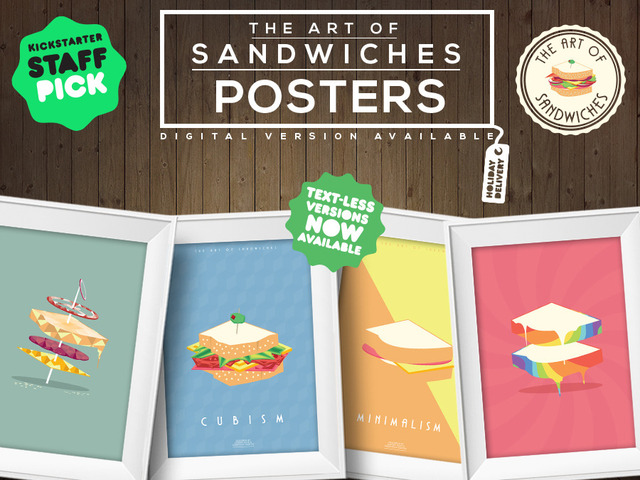 Well, this one’s just for fun. The premise is pretty random and silly, but these Art of Sandwiches posters are definitely attractive. The decision to make them available without text was a smart one, and they’d make a nice set — unfortunately, as is often the case with international Kickstarter projects, the price for people outside (in this case) Australia is a touch prohibitive.

If we’re going to have armies of robot servants, we probably shouldn’t make them look like scary terminator exoskeletons or creepy rubber-skinned mannequins. It’s actually not that easy to avoid the uncanny valley, but that difficulty isn’t going to prevent folks from trying to create ever more life-like (yet fake) people. Here are just a few links pointing to some cool projects to design our artificial replacements.

Making Google Products Easier To Use Is Not 'Encouraging Stealing'

Recently, Google Docs unveiled a number of new features including a built-in way to use Google Image Search to find pictures to complement written documents. Many people already use Google Image Search to find suitable graphics, regardless of the owner or copyright status, but this streamlining has some people calling foul. Under a provocative title suggesting that Google is “encouraging schoolchildren to steal photos,” Steve Rubel continues to propagate the confusion between theft and infringement. No matter how many times we explain it, people just don’t seem to understand that copyright infringement is not theft. Theft involves the removal of a rival good whereas copyright infringement makes a copy, leaving others’ use uninhibited. Although the suggestion of expanding Google’s Creative Commons filter is a welcome one, I doubt users who want to only use properly licensed content will fail to do so because of Google Doc’s new feature. And those who want to use copyrighted images will do so whether or not they have to simply right click or open a new tab and search. All Google is doing here is making its perfectly legal features work better together. That’s about efficiency, not “stealing.”