Hollywood Accounting Strikes Again: Universal Sued For Screwing Over Its Own Sister Company

We’ve discussed a few times the concept of Hollywood Accounting, which covers the various tricks of the trade pulled by the big studios to basically keep all the money for themselves, and guarantees that the movie is never, ever seen as “profitable,” as that would mean they would need to share some of the profits. It appears that we may be about to see significantly more dirty laundry revealing some of that Hollywood Accounting in detail. And this time, it’s extra special because it involves two companies who were corporate siblings for much of the time in dispute, as both were owned by Vivendi. However, StudioCanal is now suing Universal, claiming that Universal pulled accounting tricks to deny giving StudioCanal many, many millions of dollars that were owed.

For nearly ten years, Universal was delighted to accept StudioCanal’s investment of hundreds of millions of dollars to offset Universal’s financial obligations. During most of this period, StudioCanal and Universal were corporate siblings through common ownership by the French company Vivendi. The StudioCanal/Universal joint venture financed forty-four Working Title motion pictures, including About A Boy, Bill Elliot, Bridget Jones Diary, Frost/Nixon, Love Actually, O Brother Where Art Thou?, Pride And Prejudice, and United 93.

Those audits revealed that Universal was violating its fiduciary and contractual obligations to StudioCanal. For example, based on the audit reports, StudioCanal is informed and believes, and based thereon alleges that: (a) Universal intentionally hid from the partnership and kept for itself benefits it derived from off-balance sheet financing arrangements; (b) Universal failed to report, or reported negligible amounts of, ancillary revenues from sources such as music publishing, only to somehow “find” several million dollars in such revenues after receiving the audit reports; (c) Universal retained for itself financial benefits from vendors, thereby profiting for itself at the expense of its partners; (d) Universal double-charged the partnership for producing and other fees paid to Working Title without StudioCanal’s knowledge or approval; and (e) Universal deducted millions of dollars in unsubstantiated expenses before reporting the results to its partner StudioCanal.

Of course, none of this should be remotely surprising. We’ve seen so many stories of movie financing shenanigans that these stories hardly sound unique. It’s just that the lawsuit might make some of the actual details public, which would certainly be educational.

As Mike pointed out in his post concerning the “Intellectual Property and the U.S. Economy” report, the entities behind the push for greater IP enforcement continue to deliver laughable numbers with a straight face, expecting legislators to accept these inflated “loss” numbers with complete credulity. Also par for the course is the chorus of supportive voices echoing the catch phrases and magical loss numbers contained in the report, starting out with Techdirt favorite Creative America, which revived its mostly dormant blog to drop some quotes from AFL-CIO president Richard Trumka on the continued “impact” of “digital theft” on “American jobs.”

Trumka delivered these remarks during the presentation of the report, taking time out to laud the “heavily unionized” but unsung heroes of the entertainment industry, especially those who make up the constantly-threatened demographic of “middle class professions.” Trumka does the usual “it’s not movie stars, it’s the heavily unionized middle class” that suffers the most when infringement occurs, touching on the “downstream revenues” that provide the unsung heroes with their income. And he drops the almost-obligatory (and always unchallenged) statement expressing just how many jobs have been lost to “digital theft:”

But along with billions of dollars each year, digital theft has cost the U.S. entertainment industry countless jobs.

I’m inclined to agree with Trumka’s estimate on lost jobs. It certainly is “countless.” No one trotting out this anti-piracy trope seems to be able to provide anything more specific than “billions of dollars” and “countless jobs.” You know, the Bureau of Labor does a little counting now and then and, according to its reported figures, the movie and music industries employ slightly over 400,000 people, all of whom have lost their jobs to digital theft within the past half decade, if statements like Trumka’s are to be believed.

Of course, the more Trumka says, the further away he travels from anything resembling a “fact.” His “corroborating evidence” speeds past the exit marked “Last Normal Talking Point for 500 Miles” and heads straight for the Hollywood suburb of Pure Speculation:

A 2011 report from the U.S. International Trade Commission estimated conservatively that if China protected intellectual property as the U.S. does, there would be approximately 923,000 new U.S. jobs.

So, if we’re going to take this report at face value, the entertainment industry isn’t actually losing any jobs, it’s just failing to create new ones. I haven’t “lost” every job I’ve never been hired for. Trying to claim that jobs “not created” is equal to “jobs lost” is the sort of last-ditch semantics deployed by spokesmen who know they’ve got nothing solid to work with. If Trumka’s statements are taken at face value, simply getting China to play nice with American IP would more than triple the number of people employed by the movie and music industry.

What’s even more confusing is that pro-IP groups can’t even get their own numbers to paint the same picture. The Copyright Alliance blog has its own post dealing with the “Intellectual Property and the U.S. Economy” report, which paints a very different picture.

Industries that rely heavily on patents, trademarks and copyrights have a significant impact on the economy and have a ripple employment effect to other industries not directly focused on IP. The report cited an employment increase of 46.3% among copyright-intensive industries between 1990 and 2011.

OK… So, which is it? Is the US creative economy leaking jobs at an alarming rate or is it stronger than it’s been in over 2 decades? If these industries can show an employment increase of 46.3% while weathering the threat of blank CDs, Napster, BitTorrent, the Pirate Bay, personal computers, DVD burners, streaming services, file lockers and, well, pretty much everything Google-related, than what seems to be the problem? Is China really eating our IP lunch? Are we somehow simultaneously losing and gaining entertainment jobs at such a breakneck pace that even those delivering talking points can’t even get on the same page of the report?

Yes, in fairness, these numbers are looking at different things. Trumka refers directly to the “entertainment industry,” which to the AFL-CIO generally refers to the motion picture industry, where unionization is more prevalent. The Copyright Alliance blog simply mentions “copyright intensive industries,” which somehow include the same industries (software, computing) that took a stand against the last major “copyright intensive” legislation push, not to mention unrelated things like “dairy products”. Nevertheless, there is quite the contradiction between the soothsaying on one end and the cheerleading on the other.

In the rush to make it appear as though many millions of Americans (40 million, according to their own numbers — 20% of the nation’s workforce) are somehow dependent on thriving “copyright intensive” industries, the cheerleading squad manages to contradict its own claims. Either the inclusion of the tech industry to the “copyright intensive” workforce is responsible for the entire 46.3% jump in employment (or more actually, considering “countless jobs lost”), or the entertainment industry (read: movies and music) isn’t shedding workers quite as fast as the surrounding panic would indicate. In fact, the industries affected the most by”digital theft” seem to rise and fall at the same rate as “non-IP intensive” industries, as indicated by information included in the IP-sky-is-falling report. 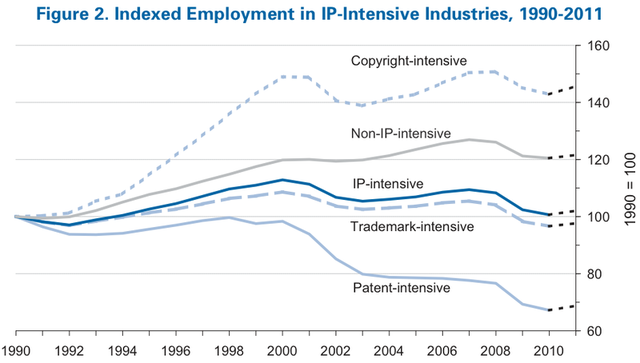 The final question remains: why would anyone believe these numbers? The jobs theoretically affected by “digital theft” range from the Bureau of Labor’s reported 400K to the industries’ own estimates, which vary from 5.1 million (“…creative community, including software, content and computing industries…”) to a thoroughly ridiculous 40 million (“…IP-intensive industries support at least 40 million jobs and contributing $5 trillion dollars to the economy…”). Without a true baseline, the numbers mean nothing. “Countless jobs lost” will remain unenumerated due to a lack of information, which works out just fine for the industries’ lobbyists and spokesmen. Nothing’s scarier than unspecified amounts. Leaving the job losses “countless” allows them to be as large as anyone wants, needs or imagines them to be.