In case you haven’t heard, we’re holding a huge clearance sale over in the Insider Shop! We’re getting rid of all our existing Techdirt gear to clear the way for new merchandise in the future — so now is your last chance to pick something up. The sale ends this Sunday, December 13th. 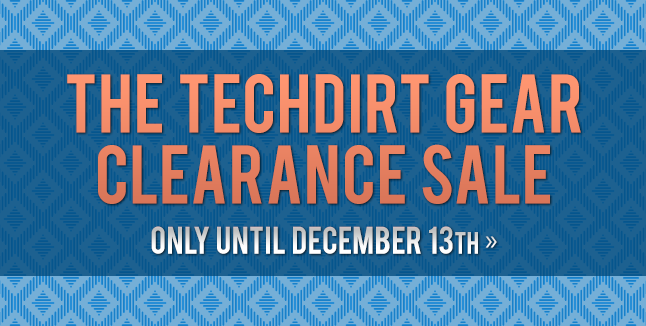 We’ve also got some gear from Techdirt’s think-tank, The Copia Institute: a logo t-shirt and keychain, and a ready-to-assemble Copia Cardboard kit for diving into the world of smartphone-powered VR.

The Techdirt Gear Clearance sale runs until December 13th, and all merchandise orders will be processed and shipped together on the 14th and 15th. Check out the sale today!

Coincidentally Just In Time For Black Friday, It's The Techdirt Gear Clearance Sale!

We never planned to have a Black Friday event, but we have been getting ready to hold big sale for a while now, and it just so happens to have serendipitously coincided with the (in)famous shopping event — so here it is! Starting today, we’re clearing out all our existing Techdirt merchandise to make room for new offerings in the future. Until December 13th in the Insider Shop, we’re offering huge discounts on all our shirts, hoodies and more in the Techdirt Gear Clearance Sale.

In addition to favorites like the DMCA t-shirt and the Seized t-shirt (both over 40% off), we’ve dug up some old Techdirt classics from before the Insider Shop: t-shirts featuring the original DMCA design and one of our many inside jokes for only $10 each. We’ve got extremely limited quantities and size availability in these designs, and some will likely never be offered again, so act quickly if you want to grab one! There’s a bunch of Techdirt logo gear with huge discounts too.

We’ve also got some gear from Techdirt’s think-tank, The Copia Institute: a logo t-shirt and keychain, and a ready-to-assemble Copia Cardboard kit for diving into the world of smartphone-powered VR.

The Techdirt Gear Clearance sale runs until December 13th, and all merchandise orders will be processed and shipped together on the 14th and 15th. Check out the sale today!

Announcing The 2014 Holiday Sale At The Techdirt Insider Shop

from the reason to give dept 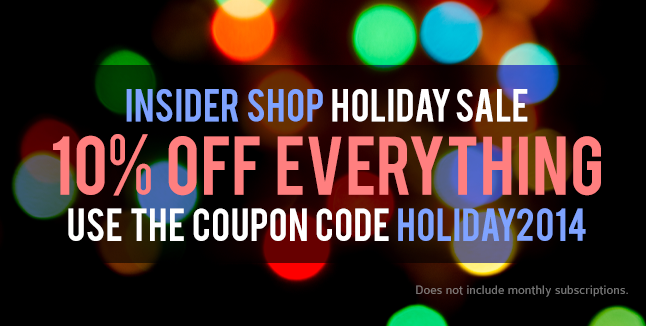 The past couple of years, we’ve had a special Holiday Bundle over at the Insider Shop, but this year we’re trying something a bit different: 10% off everything storewide, with the coupon code HOLIDAY2014.

(Okay, not quite everything: the discount doesn’t apply to monthly subscription products. But it does apply to the yearlong subscription specials for Watercooler and Behind The Curtain memberships, as well as the non-recurring one-year Crystal Ball subscription. And remember, all these items can be applied to your own Techdirt account or gifted to someone else.)

We know we’re a little bit late getting this out there, but there’s still time to order Techdirt gear for Christmas! Domestically, for USPS Standard Shipping, orders made by December 15th (that’s next Monday) should arrive in time, and there may be express options available depending on your location. For more detailed information, consult this shipping calendar, and try to order soon just to be safe!

from the reason to buy dept

It’s that time of year again — we’ve got a bunch of treats for readers who want to support Techdirt while getting some new gear and perks for the holidays. Today we’re happy to make three big announcements about the Techdirt Insider Shop.

First, the shop is accepting Bitcoins! You can now use the internet’s native currency for any purchase — just fill your cart as usual and select the Bitpay option at checkout.

Second, in celebration of that upgrade and as part of the Bitcoin Black Friday event happening today, we’ve put a bunch of items on sale. There are savings on a bunch of Insider gear, plus big discounts on our offerings for serious fans: Lunch with Mike and an awesome day with Techdirt.

Last but not least, it’s time for the return of the Holiday Bundle! 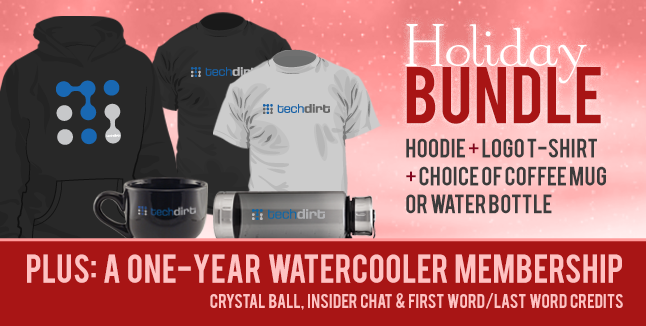 This year’s bundle includes a pullover hoodie, your choice of a coffee mug or water bottle, and the classic logo tee in your choice of light or dark gray. On top of that, the bundle includes a Watercooler Special: one full year of access to the Crystal Ball and the Insider Chat, plus a monthly cache of First Word/Last Word credits and an exclusive group video chat with Mike. All together this package would normally cost up to $152, but for a limited time it’s available at $99!

If you’re ordering gear from the Insider Shop to give as a gift, please do it soon to ensure it ships in time! Unfortunately we are unable to guarantee Christmas shipping, but orders placed by December 14th (in the US) or December 9th (internationally) should arrive on time with all shipping options. Depending on your location, there may be express shipping options available as well.

from the rtb dept

As some of you may know, in addition to posts and comments for Techdirt, Tim Geigner aka Dark Helmet also writes novels. Today we’re happy to announce that all three of his “conspiracy fiction” titles are now available as PDF ebooks in the Techdirt Insider Shop. These new editions feature brand new cover art and are all available on a pay-what-you-want basis, so head on over and download these three novels today: 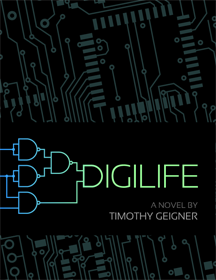 Digilife »
David Barker is a child psychologist. A United States defense software contractor commissions him to help with one of their programs, the first true digital consciousness. The program has taken hostages in the company’s underground lab and the company sends David into the lab with a handpicked team of specialists: a mathematician, a computer engineer, a cultural anthropologist, and representatives from the military. Their task is to regain control over this new being and convince her to let her hostages go. But from the moment they set foot in the underground lab, David realizes that the company’s claims of control over this digital being have been flights of fancy and their mission to reason with the first digital consciousness becomes a struggle to survive. 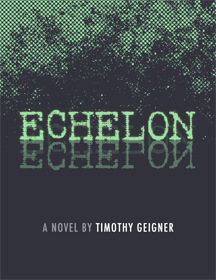 Echelon »
Payton “Doc” Connor is an investigator at the Center for UFO Studies in Chicago, a real-life private agency that investigates the paranormal. He has a reputation for dissecting reports the agency receives and proving them to be hoaxes. Shortly before the agency sends him on a routine investigation to New Mexico, the Agency assigns him as mentor to a new investigator, Chanel Falasco. During the trip to the desert, they are contacted by a contemporary “Deep Throat”, who confesses his part in a national conspiracy that includes Freemasonry, the Illuminati, and a cult born of Nazis that escaped the Nuremburg Trials with the help of wealthy industrialists. The confessor wants to use them and CUFOS to expose the group he works for before their ultimate goals are realized through an illegal surveillance network referred to only as Echelon. 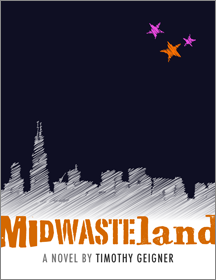 Midwasteland »
It is the near future in a post-apocalyptic Chicago and Anton Donovan is an anomaly. That is, though he appears to be human in every respect, he is actually a mutated version of a human. There are several differences between anomalies and humans, but the most compelling of these is the anomaly’s ability to manipulate radiation that has been left behind by a long ago waged nuclear war. The humans fear this power and they have instituted a testing process to find and euthanize anomaly children in their cities. The result of this is that anomalies only live in freedom outside of human civilization. Because of a series of personal tragedies suffered at the hands of one of these anomaly enclaves, Anton joins the human military. They think that he is going to help them hunt down his own kind, but instead he is going to use his unique situation to push both sides towards a peace, even as both humans and enclaves alike prepare to wage a worldwide war.

from the tis (almost) the season dept

With the holiday season upon us, we figured it was time to offer some special deals over at our Insider Shop — just in case you’ve got someone on your list this year who would appreciate some Techdirt gear or a subscription package (or if you feel like giving yourself a gift this season). So today we’re unveiling two limited-time offerings. First up, the Holiday Bundle: 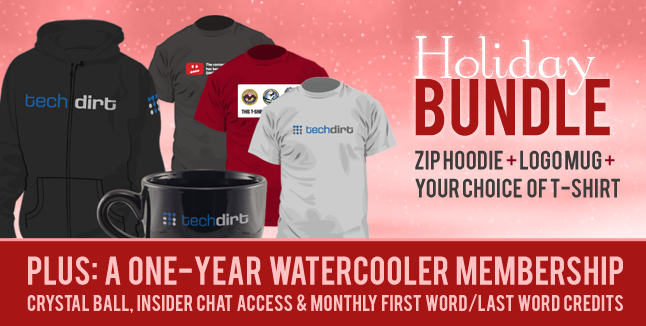 For only $99 (over $50 off the regular price), the Holiday Bundle includes:

This package will only be around for a limited time, and some sizes are already selling out, so if you want one, don’t wait too long to order! We’re also happy to announce a special deal on multiple t-shirts, for those who want a complete set or need a few to give out as gifts: 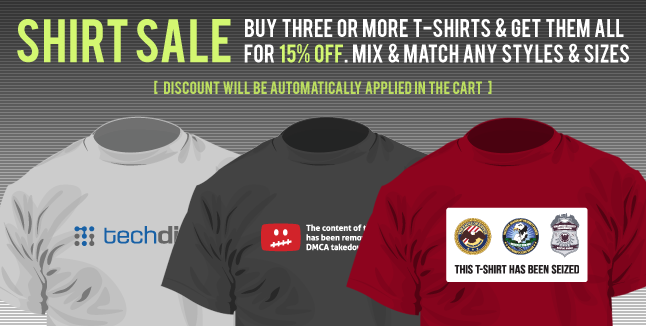 If you’re ordering t-shirts, the bundle or any other gear as a gift, please order soon to ensure shipping in time for the holidays! We’ve spoken to our fulfillment partner and determined that orders placed by December 14th (in the US) and December 9th (internationally) should arrive on time with all shipping options, and depending on your location there may be express shipping available, too—but ordering early is always safer!