from the nicely-done dept

Radiohead has always taken a more thoughtful, less kneejerk approach to how it handles the kinds of situations that many others in the recording industry tend to respond to by freaking out. Back in 2007, in the midst of the worldwide freakout over piracy, Radiohead released a surprise album, telling fans they could pay what they wanted to download it (while also selling a more expensive “box set”, giving its biggest fans a good reason to pay extra. The band has also been supportive of file sharing and even leaked some of its own tracks via BitTorrent.

So perhaps this following story shouldn’t be seen as too much of a surprise (though, I imagine it was a surprise to whoever hacked Radiohead frontman Thom Yorke). As noted in that parenthetical, someone apparently hacked Yorke, and somehow got access to a set of 18 minidiscs of somewhat random/eclectic material that Yorke had recorded in the 1996/97 timeframe, when the band was working on its seminal Ok Computer album. The hackers apparently then asked Yorke/Radiohead for $150,000 not to release the material. The band chose not to give in to the hackers, who then did leak the material. However, soon after the material was leaked, the band announced (via Radiohead guitarist Jonny Greenwood’s Instagram) that the band was now officially “releasing” that material on Bandcamp for £18 (or more) and donating any funds raised to Extinction Rebellion (a climate change advocacy group).

Greenwood’s writeup — titled “Walter Sobchak vs Bunny’s toe, as an amusing nod towards the extortion attempt in The Big Lebowski — is worth reading:

We got hacked last week – someone stole Thom’s minidisk archive from around the time of OK Computer, and reportedly demanded $150,000 on threat of releasing it.

So instead of complaining – much – or ignoring it, we’re releasing all 18 hours on Bandcamp in aid of Extinction Rebellion. Just for the next 18 days. So for £18 you can find out if we should have paid that ransom.

Never intended for public consumption (though some clips did reach the cassette in the OK Computer reissue) it’s only tangentially interesting. And very, very long. Not a phone download. Rainy out, isn’t it though?

And yes, the file is quite large — approaching 2GB — and the band itself says it’s not that interesting. But, of course, fans are interested, because that’s what fandom is about. In fact, it’s quite interesting to see that a bunch of fans have put together a crowdsourced Google Doc creating a track listing and annotation of what’s in the files (though, they also have to explain that they weren’t the ones who hacked Yorke’s stuff in the first place). The notes themselves are kind of interesting: 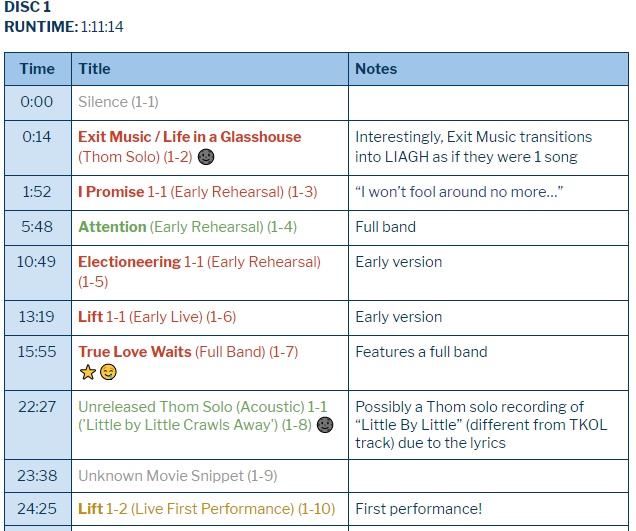 As with all such things, this could easily have turned into the band just complaining about a situation that basically everyone agrees is unfair and unpleasant. However, Radiohead, of all bands, appears to have been quick to turn what is undoubtedly a crappy situation into a positive one that both supports a charity they like and builds tremendous goodwill with fans (while making the hackers look awful).

There’s a key point in all of this that is worth noting, and it’s one that we’ve tried to make for years about piracy: we’re not arguing that piracy is somehow a good thing. However, we have argued that piracy happens. The question is how you respond to it, and whether or not you can turn it into a positive situation. Too many in the music industry have taken piracy and turned a bad situation into something worse — pissing off fans, annoying people, and doing damage to their own brand. Radiohead has long realized it’s better to do the exact opposite. That’s not cheering on the hacking (or piracy), but noting that when a bad thing happens, you might as well figure out how to make the best of it.

Radiohead has done that. I wish many others in that industry would do the same.