Nearly three years ago, Fight Copyright Trolls had an interesting post about a copyright lawyer named Mike Meier who “flipped sides” from defending people who had been hit with copyright troll demands to becoming something of a troll himself. It featured two screenshots, showing how Meier’s website quickly flipped from looking to help people who’d received a demand letter to a site that looked similar… but was clearly on the other side. Here was the original: 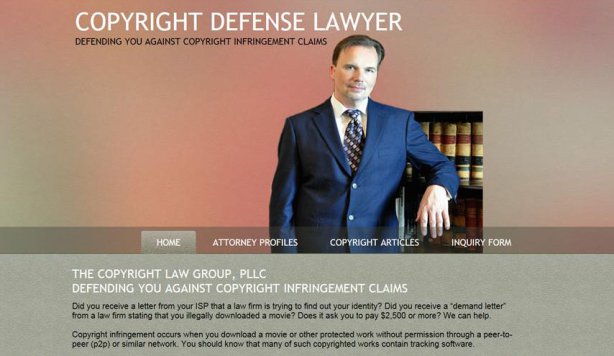 There he calls himself a “copyright defense lawyer.” It asks if you’ve received a letter from your ISP or a letter demanding you pay $2,500 or more, saying “we can help.” Elsewhere Meier called trolling extortion, saying:

“In my opinion, they are bill collectors for the movie industry,” he said. “They’re basically extorting money.

He was even listed on the EFF’s page for defense attorneys who could help out people hit by copyright trolling demands, and helped highlight how bad IP addresses were at identifying individuals.

And then, very soon after that, the website changed to this: 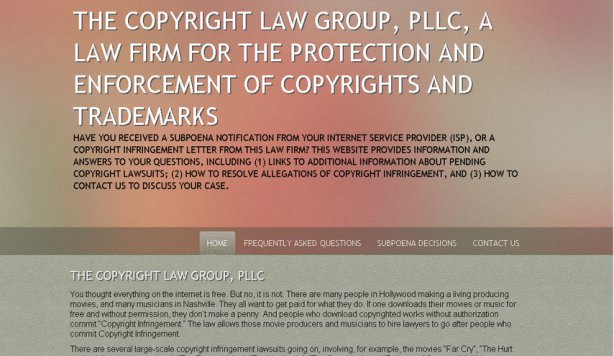 That is, rather than helping people, Meier’s website was suddenly a landing page for people who had received such letters sent by his law firm, providing them “ways to resolve allegations” (i.e., pay up!). It also has some funny text about folks struggling to make money in Hollywood because of you and your piratey ways.

For what it’s worth, John Steele appears to have claimed credit for “flipping” Meier.

Either way, it appears that last week, Meier decided he no longer wanted this information online. He ridiculously decided to send a very questionable DMCA notice to Fight Copyright Trolls’ registrar (not to Fight Copyright Trolls itself or to its hosting company, but the domain registrar). Oh yeah, and he sent a similar letter to ExtortionLetterInfo.com’s registrar despite ELI focusing more on Getty Images trolling, rather than Steele/Meier-style trolling. ELI had, however, highlighted some of Meier’s copyright trolling practices.

Meier’s attempt to memory hole the stories about him are somewhat laughable. There are no reasonable DMCA claims here. The only possible copyright claims are in the screenshots, and those are clearly not infringing via fair use — he further fails to show what content is actually infringing. If Meier actually wanted to pursue a DMCA claim he would quickly find himself up against the DMCA’s 512(f) for misrepresentation. With the ELI letter it’s even worse, since there were no screenshots at all, and thus the claim is even more frivolous. In both letters, Meier also claims that the information is libelous and defamatory, though (of course) he fails to state which content is defamatory and why it’s false. That’s because he can’t. Not only is he beyond the statute of limitations for bringing a defamation claim, as far as I can tell, the statements made about him are either opinion (not defamatory) or based in fact (not defamatory).

Meier’s letter also exaggerates what these registrars “need” to do. In both letters, he claims that they “need” to remove the content, saying that the law “requires” the registrars to do this. Except that’s not what the law says. Service providers can remove or disable access to the content if they wish to keep the DMCA’s safe harbor protections, but there is no requirement that they do so, and especially in cases of bogus demands they have absolutely no reason to do so.

In the end, it seems clear that Meier is yet another in a long line of folks trying to abuse the law to silence critics. Making questionable copyright and defamation claims may work against people who don’t know the law very well (perhaps why he targeted registrars who were a couple steps removed from the sites in question). It appears to have backfired spectacularly, and some stories that had long since faded into history are now back on the front page. As are discussions of how Meier was once sanctioned in a ruling that makes for some entertaining reading, calling out Meier’s efforts as “absurd,” “ridiculous and nonsensical” “baseless claims and frivolous arguments” and “needlessly, unreasonably, and vexatiously multiplied the proceedings in bad faith” (and that’s all in just one paragraph). Later the judge mocks Meier by noting that “any competent attorney” wouldn’t have filed the claim and calls him out for “unacceptable, reckless misinterpretation and misunderstanding or on blatant and knowing
misrepresentations.” I also like the court’s response to Meier’s motion in that same filing: “No. The Court is unsure what more it need say.”

Of course, none of that would be drawing attention these days if Meier wasn’t trying to abuse the DMCA process to remove earlier criticism of himself.