At the beginning of the year, the DOJ and DHS teamed up to release a report (very) narrowly crafted to support President Trump’s claims about inherently-dangerous immigrants. Known as the “terrorist entry” report, it skewed data and omitted all mentions of domestic terrorism to paint a distressing picture of foreign individuals wreaking havoc on US soil.

The omission of domestic terrorism was by design. The Executive Order predicating the report [PDF] specifically called only for numbers on “foreign nationals in the US who have been charged with terrorism-related offenses.” That’s because those numbers would look pretty unimpressive stacked up against terrorist acts perpetrated by US citizens, as was pointed out by Lawfare’s vetting of the report.

Even if you look past the report’s built-in confirmation bias, the stats compiled by the DOJ/DHS are still questionable. The number of foreign-born terrorism convictions is inflated by defendants who never even temporarily resided in the US.

What’s more, the list included almost 100 foreign-born defendants who were extradited into the United States and therefore never would have been affected by U.S. immigration policy. That is, even excluding domestic terrorism cases, it was possible to support the president’s claim only if one counted as foreign-born terrorism suspects people the United States had actively imported in order to prosecute for terrorism or terrorism-related crimes.

Cleaning up the data — stripping out extradited defendants — results in unimpressive stats that hardly back the administration’s claim that foreign-born individuals are more dangerous than natural-born US citizens.

Ben Wittes of Lawfare is doing more than pointing out the flaws in the report’s methodology. He’s suing the government over its misleading data. Along with the Protect Democracy Project and the Brennan Center For Justice, Wittes is taking the DHS and DOJ to court for violating federal law with the release of this misleading report. (via Courthouse News)

The lawsuit [PDF] points out the administration’s report is, at best, highly misleading.

The Report is rife with inaccuracies and methodological flaws. It fails to disclose most of the data on which it is supposedly based, and fails to objectively analyze what limited data it does identify. Its leading claim is that 73% of individuals convicted of international terrorism-related charges since September 11, 2001 were born in other countries. See Report at 2. Defendants do not reveal the data supposedly underlying that statistic, and a review of the available data demonstrates that the statistic is likely wrong and, at the very least, highly misleading.

In addition to this, Wittes, et al allege the report relies on unreliable studies when not misstating conclusions to “pander to negative stereotypes about Islam.” But what can citizens do when the government supports its own actions with bogus numbers and purposefully-skewed data sets? Turns out there’s a law for that.

Fortunately, Congress has provided a remedy for correcting inaccurate or misleading information distributed by executive agencies. The Information Quality Act (“IQA”) requires that information published by agencies of the federal government satisfy standards of objectivity, utility, and integrity. The IQA requires agencies to identify the data and methods underlying their statistical claims. It directs the Office of Management and Budget (“OMB”) to promulgate information quality standards for any information that executive branch agencies disseminate. These standards are legally binding, and require that agency publications be accurate, clear, complete, unbiased, and useful to both the agencies and the public.

And when a report is released that satisfies almost none of these stipulations? Citizens are welcome to use the law to seek redress and official corrections.

The IQA also provides a process for third parties to challenge and obtain corrections to publications that violate these standards. On February 8, 2018, Plaintiffs filed a petition (the “Petition”) with Defendants identifying specific flaws in the Report that violate the quality standards in the IQA and its implementing regulations. Plaintiffs requested that Defendants either rescind the Report or revise it to correct the IQA violations identified in the Petition.

Defendants have not responded to the Petition within the time allotted by applicable regulations, much less rescinded or corrected the Report. The failure to respond violates Defendants’ obligation to adjudicate IQA challenges and continues the ongoing violation of the IQA substantive standards, contrary to the Administrative Procedure Act (“APA”).

Plaintiffs seek to enforce their right to petition agencies for the correction of publications that fail to meet the IQA’s standards, and bring this lawsuit to vindicate their right to receive a response to the Petition as required by applicable regulations.

Neither agency is in any hurry to correct the record. The president has leaned on this report frequently to shore up anti-immigrant rhetoric and justify travel bans. And both agencies can hook up to federal fund fire hoses by presenting immigration as a source of national security threats. It may take a court order to push these agencies to reveal their underlying stats and methodology, if not issue a corrected report fixing its numerous errors.

Review manipulation in the crowdsourced data era is of course nothing new. Amazon just filed a new lawsuit against more than 1,000 people who were selling reviews for as little as $5 a pop. Elsewhere, companies with a vested interest in making their streaming video catalog as attractive as possible will magically skew aggregated review data higher. Head over to any number of services like Walmart’s Vudu and you’ll notice that it’s almost impossible for a crap film to drop below three stars, not matter how foul of an unholy abomination it is.

Comcast-owned Fandango appears to be no exception. As a company that sells movie tickets, Fandango obviously has a vested interest in not portraying the products it sells as absolute crap. Indeed, an analysis of Fandango data conducted by Five-Thirty-Eight (prompted by somebody noticing the new Fantastic Four movie was rated far higher than such a dumpster fire deserved) found that the company’s website ensured it was impossible for most movies to ever see less than a three-star rating:

They dumped all the data to GitHub for perusal, and offered up a handy graphic highlighting the disparity between Fandango and other movie reviewing websites: 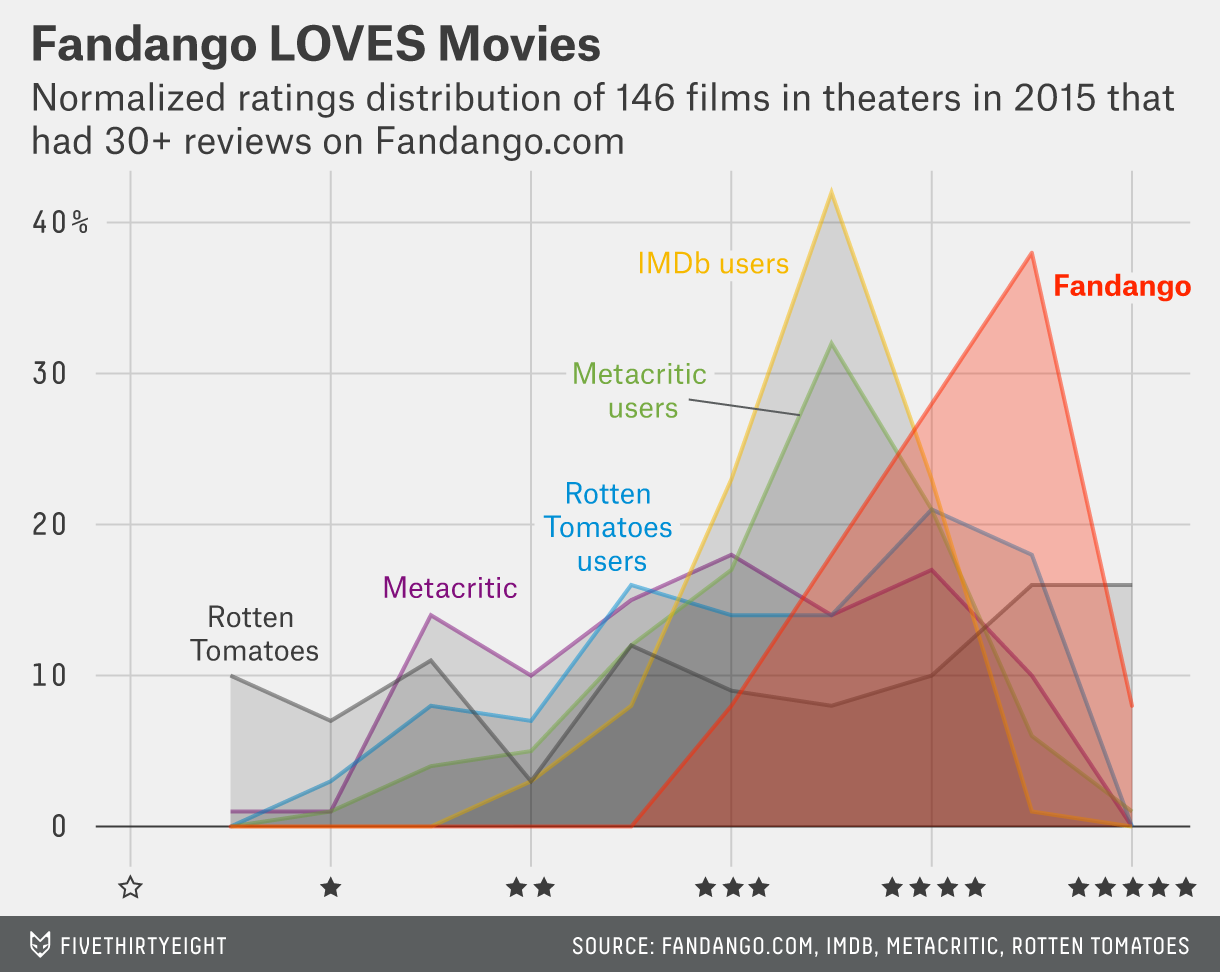 Looking further at the html source showed that the Fandango website took reviews that were recorded on server as half-a-star lower and boosted the rating on the customer-facing end. When pressed, Fandango blamed the skewed rankings on a bug that happens to have gone overlooked for years:

“However, after further back and forth, the company described the rounding disparity — by which, for example, 4.1 is rounded to 4.5 — as a bug in the system rather than a general practice. “There appears to be a software glitch on our site with the rounding logic of our five star rating system, as it rounds up to the next highest half star instead of the nearest half star,” the company said in an emailed statement. Fandango told us that it plans to fix the rounding algorithm on its website “as soon as possible.”

That hasn’t happened yet, though surely a company owned by Comcast will get around to it soon? Of course, tastes are subjective, so there’s never going to be a perfect review system; I often find 95% or higher movies on Rotten Tomatoes that I think are abysmal, lowest-common-denominator aardvark vomit. Still, if you actually want to have users return to your website, it seems like it might be a good idea to have something vaguely resembling trust and integrity at the heart of your review analysis and aggregation system. Granted, if Fandango inherits any of its parent company DNA, caring much about that sort of thing likely isn’t high up on the action item list.