Stories filed under: "pork"
Expand All Posts Collapse All Posts

Embedded In The Fiscal Cliff Deal: Hollywood Gets A Big Tax Break

from the how nice dept

Last month, we wrote about some of the more ridiculous subsidies that Hollywood studios get these days, in which approximately $1.5 billion in taxpayer money goes straight to Hollywood studios in the US (and even more internationally). While the reasoning given for most of these programs is that they create jobs, a thorough study of the various programs showed that almost never happens. Of course, most of those programs have been state subsidies. The federal government also has its own subsidies for Hollywood — and they just got renewed in the fiscal cliff deal, despite being scheduled to expire.

It’s one of the head scratchers that some noted would take people by surprise given all of the talk about the “fiscal cliff.” Here’s what it looks like: 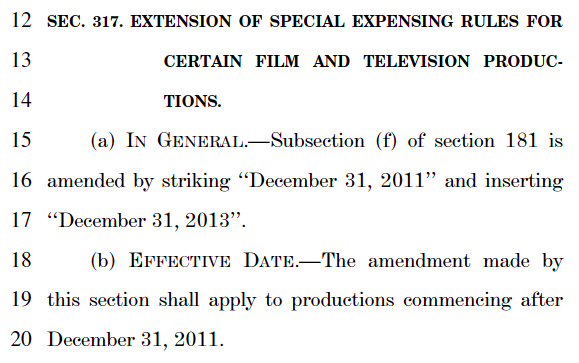 Like many such things, this started out with good intentions, with the idea being to help small, independent films stay in the US. But that changed:

Apparently, this sucker costs the American taxpayer about $150 million per year. As that link notes, “Disney’s Gotta Eat.” Yes, this was just one of many such “pork” efforts slipped into the fiscal cliff deal — along with things like providing Goldman Sachs subsidies for its headquarters, special breaks for NASCAR, tax benefits for Puerto Rican Rum, and more — so perhaps it’s not that surprising. But, it’s stories like this that explain why so few people trust Congress, and why they’re fed up with “crony capitalism.”

Cupcakes were really trendy for a while, but they’ve probably jumped the shark by now. Still, who doesn’t enjoy a good cupcake every now and then? Here are just a few examples of some interesting twists on the traditional cupcake — that include a few more animal parts than you might expect (or want).

Pork is one of the most commonly consumed meats worldwide. Interestingly, even though it was marketed as the “other white meat” (that slogan was retired in 2011), the USDA always referred to pork as a “red meat” on its website. Here are just a few more fascinating tidbits on pig products.

DailyDirt: Super Foods… To The Rescue

While there are a lot of debates going around about the wisdom of genetically modified organisms, a bunch of food scientists are working with edible concoctions that aren’t GMOs. Traditional breeding of naturally-occurring varieties of fruits and vegetables can still produce some pretty amazing results. And ultimately, consumers are voting with their purchases — which is creating all kinds of food innovations. Here are just a few examples.

Pork Board Admits It Knows Unicorns Don't Exist, But Claims It Doesn't Matter

from the not-quite dept

“We certainly understand that unicorns don’t exist,” said Ceci Snyder, vice president of marketing for the National Pork Board. “Yes, it’s funny. But if you don’t respond, you are opening your trademark up to challenges.”

Except, that’s not true, and you would think the NPB’s trademark lawyers would point that out. Over aggressive trademark defenders often make statements like the one above about how they “have” to defend their trademark or they risk losing it. But that’s only in cases where the mark is actually likely to cause confusion or is not used in a manner that is clearly fair use (such as a parody, as in this case). So, like unicorns, the NPB’s claim that they had to send this cease-and-desist is nothing more than a myth.

In my post about the financial crisis earlier this week, I explained the rationales both for and against the so-called “bailout bill.” With some of the important indicators getting seriously scary, it was becoming increasingly important that something be done to keep money flowing, but this bill isn’t it. Who would have thought that after the House rejected the bill earlier this week, that they would come back and approve something much worse. Rather than address the fundamental problems of the bill (and, well, the economy), what Congress did was stuff the bill full of pork, adding in every little personal favor to local industries they could dig up. Basically, all of the politicians added in little “gifts” to local industries, as a way of calming public dissent against the bill. And, of course, apparently that was all it took to get the House to approve the bill. Now they can go back home and say that they fought to “protect” their local constituents in the bill, when all they really did was put some pork in to bribe them.

While there’s still a chance that this plan works out — and, at this point, it’s entirely based on who will control the fund — the bill has done little, if anything to actually address the real issues that created this economic mess, and uses a sledge hammer where a scalpel would have made more sense. If it ends up succeeding, it will be in spite of the bill, rather than because of it.