Stories filed under: "reinvent the wheel"
Expand All Posts Collapse All Posts

Patent System Encouraging People To Try To Reinvent The Wheel

Here’s a fun post from BetaBoston, looking at a few attempts by people to literally “reinvent the wheel” by looking through various patents and patent applications on different attempts at wheel-based inventions. The first one may be the most incredible. Granted in 2001 by the Australian patent office, John Keogh’s invention for the “circular transportation facilitation device” has the dubious distinction of also being revoked by the Australian patent office after it got some publicity back in 2001 (winning an Ig Nobel Prize that year). Here’s the drawing of the “invention.” 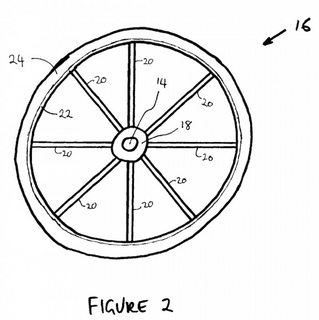 Nice work, right? At least in that case, Keough admitted that he was just trying to pull a fast one on the patent office, proving just how lax its approval standards had become. Others, apparently, were serious.

German patent application DE20122871, filed July 3, 2001 by Manfred Wanner and Harald Bartol of Eberdingen, Germany for a ?wheel for vehicles, especially two-wheeled vehicles of the high performance type, comprising a provided with a rotational axis of hub, spokes and a rim, which is designed to receive a tire, the wheel having an apparatus for aerodynamic optimization??. This is what it looks like: 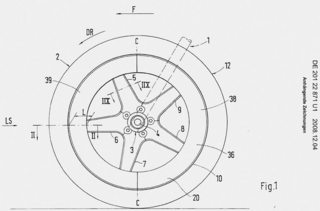 World patent application WO 2014012648, filed June 12, 2013 by Roberto Pisacane of Salerno, Italy. Mr. Pisacante invented ?a vehicle wheel that has at least one airfoil mounted thereon, the airfoil being arranged on the wheel body between the wheel rim and the central portion of the wheel?. When airfoil is oriented at a suitable angle, the downforce exerts a torque about the central rotation axis of the wheel can be converted directly into driving force.?

US patent 7980335, granted July 19, 2011 to Stephen D. Potter of Bedford, Massachusetts and assigned to Foster-Miller, Inc., a company that subsequently re-invented its name and now calls itself QinetiQ North America. Mr. Potter invented an ?omni-directional wheel includes a hub rotatable about a wheel axis and a first row of angled rollers about the hub each rotatably supported by the hub.? Voila: 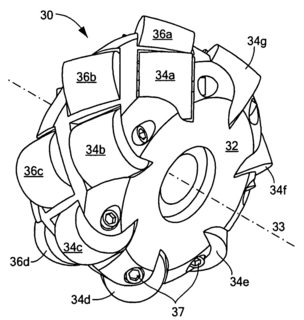 I mean, I guess that last one does seem to be at least somewhat different. But, still. This is the wheel we’re talking about. The whole underlying concept of the common phrase “don’t reinvent the wheel” is that there are some things that are core and not in need of improvement, and that we can better focus on other aspects of innovation in the actual market, rather than starting from scratch again. But when you have a patent system that gives anyone with a patent something of a lottery ticket, it’s quite tempting for lots of people just to “reinvent the wheel” in the hopes that they might be able to go after actual innovators to put a tollbooth on efforts by folks actually trying to build better tools for the market.