from the our for a sip? dept

And… yes, it appears that Rob is, in fact, the lawyer in the video as well. As background — if you somehow missed it — a few years ago, there was a virally popular rap song and video, by Brendan “B.Rich” Richmond, called Out for a Rip, spoofing Canadian culture/stereotypes. It got over 12 million views, and has become a bit of an anthem.

So, yeah. Coca Cola is using the phrase “out for a rip” on its Coke bottles and Richmond and his lawyer Kittredge decided the best way to respond was to write a song calling out Coca Cola on this and then recording a whole video. At the end of the video there’s an actual letter (part of which is dictated in the song itself) which is also pretty damn amusing:

I represent Brendan (B.Rich) Richmond (a.k.a. Friggin’ Buddy). You jacked his catchphrase, but you already know that.

Personally, I’m pretty psyched about this once-in-a-career opportunity to send a demand letter in the form of a rap video. Nonetheless, unlicensed use of OUT FOR A RIP violates my client’s rights. From what I understand, you guys do fairly well for yourselves – at least in comparison to most other multinational corporations, the GDP of most countries, or, say, the average musician, right? No room in your budget to clear IP rights?

So… yeah. I have no idea if this is a valid trademark claim, though it certainly sounds plausible. The trademark certainly exists, and does cover the phrase on “mugs, coffee mugs, travel mugs, cups, drinking cups and beer steins.” I’ve seen some people complain that “out for a rip” was in common usage going back decades, but in searching for the history of it, the phrase does show up in Urban Dictionary… but entered by “B. Richmond” about a week after the original song was released. 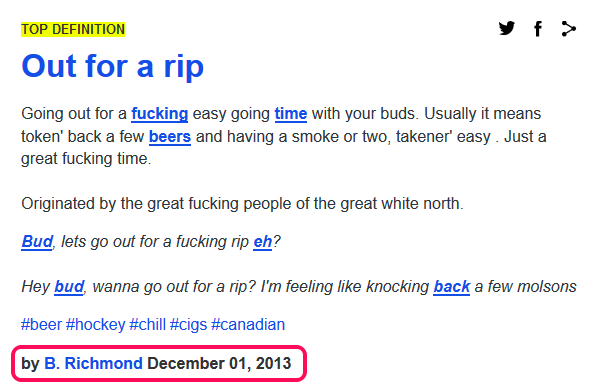 So it certainly seems pretty credible that the public associates the phrase with Brendan Richmond. Either way, I actually think this kind of response is pretty clever, no matter what. Despite being a legal cease and desist, it certainly doesn’t come off as bullying — and actually does a pretty good job of just publicizing Richmond and his music — no matter what happens with Coca Cola. If Coke is smart — and I’m hoping its lawyers are — I would imagine that responding along the lines of what’s suggested in the video would be the best way to settle this situation with everyone coming out of it looking good.

Filed Under: b.rich, brendan richmond, cease and desist, out for a rip, out for a sip, rap video, rob kittredge, trademark
Companies: coca cola