Stories filed under: "skin"
Expand All Posts Collapse All Posts

Time can heal some wounds, and technology can sometimes speed things up a bit. But regenerative medicine could really help to improve our health if we can re-grow body parts on demand. Here are just a few links on getting our bodies to heal themselves.

Restaurant Shows Us All How To Deal With Negative, Trolling Online Review

We’ve seen a wide range of methods businesses have devised for dealing with less than praising online reviews of their operations. Some choose to threaten libel. Others promise fines. Still others invoke a sort of holy legal wrath, with the weight of the Almighty tipping the scales of justice. Mind you, none of these methods does much to ingratiate the business to the public and often backfires completely by bringing attention to the negative reviews that otherwise would have been completely absent. A new method is clearly needed.

That’s where the Atomic Grill in Morgantown, WV, comes in. They too were faced with an online review that was not only not entirely positive, but also incorporated the caveman-ish request that employees of the eatery “show more skin”, because food without near-nipple just doesn’t taste as good, apparently. The owner of the grill, Daniel McCawley, was understandably less than pleased.

“It was brutish. I was upset. I’m a father of a 12-year-old girl and I’ve got five sisters,” McCawley said. “The way that women are treated is pretty personal as far as I’m concerned.”

Agreed. But what to do about it? Lawsuits don’t seem to work, as shown above, and anger on its own isn’t all that effective. Plus, there’s that probably-not-correct platitude that “the customer is always right.” So McCawley decided to marry his revulsion to that concept and concede defeat to the review in the best way possible. He decided to “show more skin.” 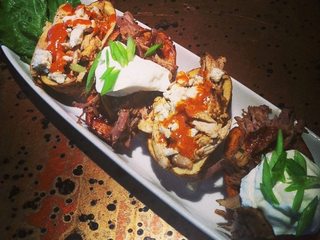 From now through Memorial Day, Atomic Grill will be offering a potato skin special for $7, and 100% of the proceeds will go directly to the West Virginia Foundation for Rape Information Services. He said the restaurant has so far received a “tremendous” amount of support. “My Facebook blew up overnight,” he said. “I really hope this will be a positive thing.”

So, he provided “more skin” in the form of potato skins, avoided any legal nonsense, showed himself to be an admirably level-headed business owner while still retaining a moral compass, and subsequently generated a ton of goodwill and publicity for his business. That’s how it’s done, overly legal business owners. A little humor mixed with social shaming does the job so much better than profit-milking lawyers.