Non-Fungible T-Shirts, And Other New Gear From Techdirt

Just in time for the holiday season, we’ve got a pair of new designs in the Techdirt Gear store on Threadless — both inspired by the ongoing conversation around (and our own experiments with) NFTs:

For those who want to celebrate and defend the ability to Right Click -> Save As, there’s the I Right Click And I’m Proud design, which is available on t-shirts as well as hoodies, sweatshirts, face masks, stickers, mugs, and more. For those who want something that doesn’t need the blockchain to be scarce and rivalrous, there’s the Non-Fungible T-Shirt (which is available only as, well, a t-shirt).

Visit the Techdirt Gear store on Threadless to get yours today! And if you’re doing some holiday shopping, also check out these academic galaxy map posters from Open Syllabus Project.

Our last t-shirt was a joke (not that we’d object to anyone buying it!) but today we’ve got a pair of real new additions to the Techdirt Gear store in the tradition of Nerd Harder, our most popular design. Introducing Nerd Mentality and Nerd Immunity!

As always, both designs are available on t-shirts, hoodies, sweaters and other apparel — plus various cool accessories and home items including buttons, phone cases (for many iPhone and Galaxy models), mugs, tote bags, notebooks, and of course face masks.

Our Latest Techdirt Gear: I Paid More For This T-Shirt Than Trump Paid In Taxes

We were working on some new Techdirt gear designs for our Techdirt Gear shop at Threadless (stay tuned!) when the NY Times dropped its bombshell of a story regarding President Donald Trump’s tax returns. As you likely know, despite every Presidential candidate in my lifetime releasing their tax returns, Trump has refused to do so (also, despite promises that he would). For years, reporters have sought out those taxes, and somehow the reporters at the Times got them. There were many interesting things highlighted in those tax returns, but a key point that has resonated widely: in the year Trump won the Presidency he only paid $750 in federal taxes (the same as he paid in many other years as well, including his first year as President in 2017).

Lots of people have been pointing out that this is crazy for all sorts of reasons, and plenty of people, including Joe Biden have jumped in with “I paid more in taxes than Donald Trump” gear. But, here at Techdirt, we believe in… going bigger. So we’re selling a “I Paid More For This T-Shirt Than Trump Paid In Taxes” t-shirt… for $751 (plus shipping). This is a real shirt and you can really buy it. Whether or not it’s worth paying $751 for such a t-shirt is a decision that only you can make, though we’d be happy with that kind of support.

Of course, if that’s a bit too pricey for you, we do still have a lot of other more affordable gear you can pick up too, like our copyright takedown gear: 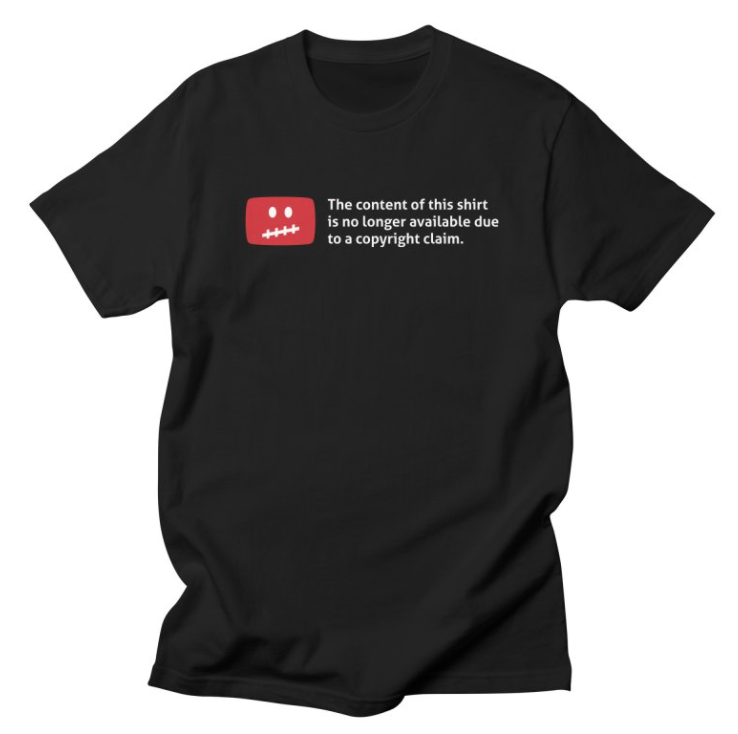 Or our 1st Emojiment gear that explains the 1st Amendment in emoji. 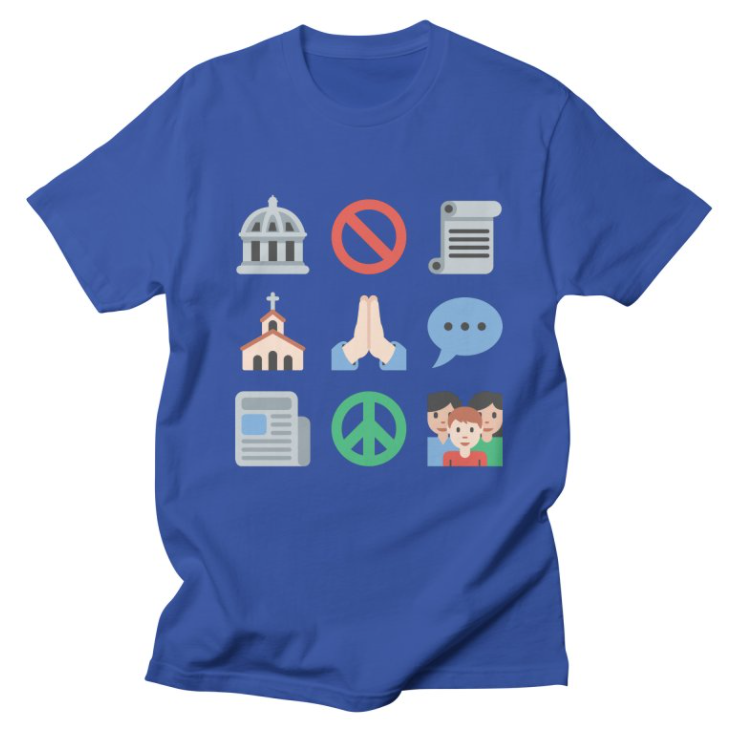 And many other designs and products (not just t-shirts, we’ve got face masks, mugs and notebooks among many other items as well). So shop around, and feel free to spend more supporting us than the President has spent supporting the United States of America.

This Week Only: Free Shipping On Techdirt Gear From Threadless

Have you had your eye on some gear from the Techdirt store on Threadless? Then this is the week to pick it up! From now until Friday at 3pm PDT, you can get free shipping on orders over $45 in the US and $80 international with the coupon code FREESHIP92031e946. The offer covers all our designs, including the new Otherwise Objectionable gear celebrating two of the most important words in Section 230, and our wide variety of face masks. There’s also our complete line of Techdirt logo gear and, as usual, a wide variety of products available in every design: t-shirts, hoodies, sweaters and other apparel — plus a variety of cool accessories and home items including buttons, phone cases (for many iPhone and Galaxy models), mugs, tote bags, and stylish notebooks and journals.

This week only! Get free shipping with the coupon code FREESHIP92031e946 »

from the wear your techdirt dept

Get your Techdirt Logo Gear in our store on Threadless »

Lots of people have been buying our newly-launched face masks on Threadless, so we figured it was time to make the classic Techdirt logo gear available on the platform. You can now get face masks in both our logo gear styles — the standard logo and the big logo — with two different kinds of masks available, as well as youth sizes.

Plus, as with all our designs, there’s a wide variety of gear available: t-shirts, hoodies, sweaters and other apparel — plus cool accessories and home items including buttons, phone cases (for many iPhone and Galaxy models), mugs, tote bags, and stylish notebooks and journals. And you can still get all our other popular designs:

As always, all the profits from gear sales help us keep Techdirt going and continue our reporting through this challenging pandemic situation and beyond. You can also check out our list of all the different ways to support Techdirt with a bunch of options for readers to help us out and get something cool or useful in return!

In Case You Missed It: The Return Of Nerd Harder Gear, Plus New Face Masks!

Nerd Harder gear is back, and face masks are available
in the Techdirt Gear store on Threadless »

At the end of last month, we fulfilled two of the most popular requests (one long-standing, and one brand new) for Techdirt gear: we brought back the Nerd Harder line of gear, and introduced a series of face masks featuring some of our most popular designs!

You can find all these offerings in our artist store on Threadless, with multiple products available. Face masks come in two styles (standard and premium) as well as youth sizes, and there are t-shirts, hoodies, sweaters and other apparel — plus a variety of cool accessories and home items including buttons, phone cases (for many iPhone and Galaxy models), mugs, tote bags, and stylish notebooks and journals.

All the profits from gear sales help us keep Techdirt going and continue our reporting through this challenging pandemic situation and beyond, and we’re hugely appreciative of all the support. You can also check out our list of all the different ways to support Techdirt with a wide variety of options for readers to help us out and get something cool or useful in return!

Face masks are now available in the Techdirt store on Threadless »

We’ve had some requests for this, and now it begins: we’re adding face masks as an option for all our gear in the Techdirt store on Threadless. Not just that, we’ve expanded the Threadless line with our ever-popular Takedown gear and the much-anticipated return of our most successful design ever: Nerd Harder.

All the face masks are available in two versions (premium and standard) as well as youth sizes. And of course, the designs are also available on a wide variety of other products including t-shirts, hoodies, mugs, buttons, and more! Check out the Techdirt store on Threadless and order yours today.

Order This Weekend To Get The Next Batch Of Techdirt Gear! As some of you might have noticed, recent upgrades over at Teespring have allowed us to change the way we offer Techdirt gear. Instead of running individual week-or-two long campaigns that only print and ship once the whole thing is completed, we’ve now got our logo gear (in two styles) and our I Invented Email gear running on a cycle with new orders printing and shipping every three days, so you don’t have to wait nearly as long to get your hands on it. Those of you who already ordered should be getting your shirts, hoodies et al soon!

Another batch closes tomorrow (Sunday) night — so order now to get in on the next shipment! The Email gear won’t be around forever, so don’t wait too long.

from the don't delay dept

Last chance this year to get Nerd Harder, Takedown, and more Techdirt gear! » 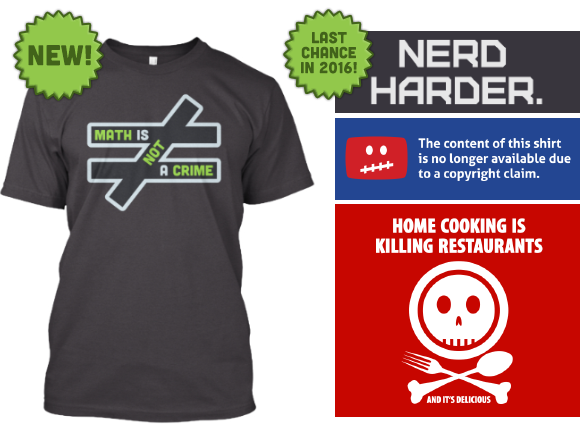 Want to get someone some Techdirt gear for Christmas? I know, I know — you probably don’t want to think about that yet. But since Teespring fulfillment sometimes takes a few weeks, we wanted to give everyone a nice big window to get their holiday orders in — or to snag some gear for themselves this fall. So why not get some holiday shopping out of the way early? Four of our classic designs plus one new one are available from now until October 3rd. Among them is the popular Nerd Harder line, which is now available on hoodies, mugs and stickers as well as t-shirts.

It’s the last time this year we’ll be offering any of these designs, and your last chance ever to get some Vote2016() gear! Order now and get it just in time for the election.

Hurry up and get your gear before it’s too late.

The Super-Early Holiday Gear Sale (Plus Our New Math Is Not A Crime T-Shirt!)

Last chance this year to get Nerd Harder, Takedown, and more Techdirt gear! »

Yes, that’s right — it’s a September holiday sale! We know it takes some time for your orders to arrive from Teespring, so we’re leaving a nice big window for those of you who want to gift some Techdirt gear in December. All our past shirts — plus one brand new design — are available from now until October 3rd.

This is the last time we’re offering any of this gear in 2016, and we won’t be taking reservations once these campaigns close! Most of the shirts will come back eventually, but we can’t promise when and it might be a year or more. Also, Nerd Harder is now available on hoodies, mugs and stickers for the first time.

As for the Vote2016() gear, this is your last chance ever! Order it now and you’ll get it just in time for election month!

Remember, you’ve only got three weeks from today to place your orders, and everything will ship with plenty of time for the holidays. As usual, t-shirts are $20, hoodies are $35, mugs are $14 and stickers are only $4 — though not all designs are available on all products! Hurry up and get your gear before it’s too late.