Stories filed under: "toothpaste"
Expand All Posts Collapse All Posts

DailyDirt: Getting A Caffeine Fix Any Way You Can…

Some people are seriously addicted to caffeine. Maybe you get headaches if you skip a morning cup of coffee or experience other symptoms of withdrawal, but if you’ve built up an extreme tolerance, you might need to start incorporating it into other habits. We’ve mentioned a few other products that come with a dose of caffeine, but here are a few more to try if you’re a real caffeine junky.

After you’ve finished checking out those links, take a look at our Daily Deals for cool gadgets and other awesome stuff.

from the really now? dept

The way the US treats prisoners is often barbaric. The UN has repeatedly highlighted how solitary confinement is a form of torture that should be stopped, but the US regularly uses it on its massive prison population (largest prison population in the world! Go USA!). And even if you don’t think it’s torture, you should at least recognize that people are thrown in solitary confinement for ridiculous reasons — such as looking at Facebook. Or, apparently, having expired toothpaste in your cell.

It appears that Chelsea Manning is now facing indefinite solitary confinment for a short list of “infractions” which include having expired toothpaste (“medicine misuse”) and having a copy of the Caitlyn Jenner issue of Vanity Fair, along with some other magazines (“prohibited property”). The other two charges may seem slightly less crazy, but not when you look at the details. They are for “disrespect” and “disorderly conduct,” but the “disorderly conduct” was for apparently sweeping some food on the floor during a dinner, and the “disorderly conduct” was for asking for a lawyer when Manning was being yelled at over the food incident. 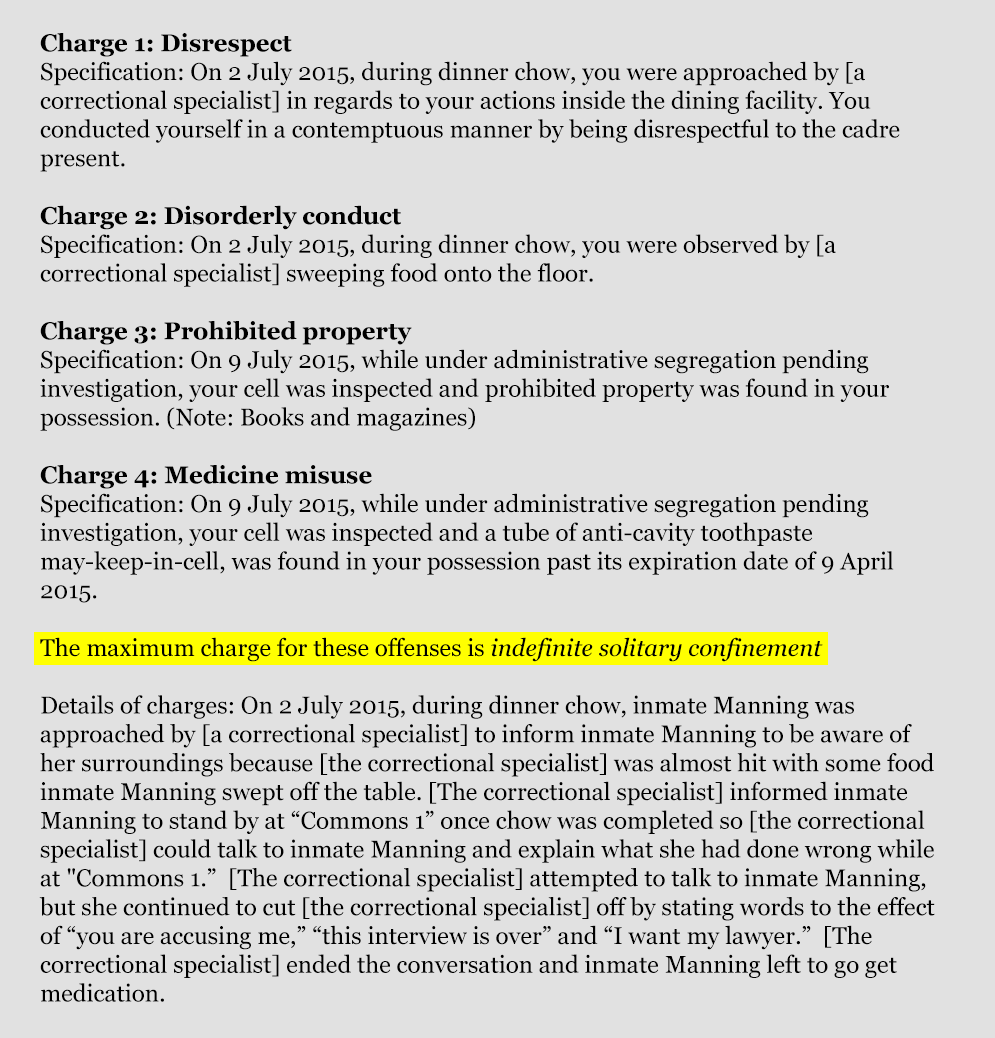 There’s a hearing about this on August 18th, and Fight for the Future has set up a petition about this to call more attention to the way Manning has been treated. As the petition says, it’s clear that Manning is being “singled out and punished for speaking out.” Even if you don’t think Manning’s actions in leaking State Department cables was just, hopefully you can recognize that indefinite solitary confinement over such minor charges is ridiculous.

Pork is one of the most commonly consumed meats worldwide. Interestingly, even though it was marketed as the “other white meat” (that slogan was retired in 2011), the USDA always referred to pork as a “red meat” on its website. Here are just a few more fascinating tidbits on pig products.

Over the years, we’ve seen a number of stories of big companies going into various countries, finding “traditional” and “herbal” remedies, and then figuring out ways to patent them. The latest such example, sent in by sinsi, involves Colgate “patenting” (in the US) a tooth-cleaning powder based on a recipe that has been used in India for “thousands” of years according to officials there. The patent itself (7,736,629) is for a “red herbal dentrifice” and, if you read the claims, it seems clear that they’re just patenting a “recipe” of sorts, which alone seems ridiculous enough. But when you add in the fact that it’s been used so widely in traditional Indian society, it gets even sillier. The whole thing appears to be yet another example of companies trying to use patent laws to lock up widely known knowledge… with the Patent Office assisting.